A short history of Fuffins Cottage

Every year throughout my childhood my family packed our bags, loaded the car roof-rack, and set forth with enormous excitement for our summer holiday at Number 1 Cottage, The Fuffins, Hunting Hall. To a small child with a love of the countryside the farm was idyllic. After marrying the farmer (Tom), bringing up a family, and dedicating my life to looking after Hunting Hall, it is still holds its magic.

In November 2007 when we began renovating the old, almost derelict cottage, I hoped that we could create a home where families would enjoy the same wonderful holiday that was so special to us many years ago; a place where visitors could help us look after this beautiful natural heritage by living a more sustainable lifestyle.

The Fuffins is a Grade II Listed Building. It was built in the early 1700’s as part of the Georgian Farmhouse. A description of the farhouse in the 19th century can be found in the Forster family records:

‘Sarah and her daughters then moved to Hunting Hall [ ]. In early 1845 it was described as have[ing] three bedroom upstairs, two parlours, a kitchen, a back kitchen and a milkhouse’ Extract taken from ‘Ancestry’ Forster family research by Dan Brock, Canada

Later, when a new farmhouse was built in 1894, the old farmhouse was divided into two dwellings, one of which is The Fuffins. Newt Cottage was added onto one end and these three cottages were used for farm workers who had previously been housed in the old pan-tiled buildings.

Our Renovations Beneath the wall plaster of the living room we discovered several past alterations. There was evidence that 7 doorways had been in use at different times! Behind a modern electric fire, we uncovered the huge fireplace that had been bricked-in. Builders had to dismantle the chimney, mend the stone lintel and rebuild it all.

In the Butterfly bedroom the lovely Georgian fireplace was hidden behind plaster and bricks. Much of it had to be rebuilt when the lower part of the chimney was dismantled downstairs. The Victorian floorboards had been laid on top of much older, wider 18th century floorboards.

We were delighted to receive Listed Building Consent to create the main bedroom in the cottage roof-space. The two end windows and conservation Velux windows have made this a light, airy space. We found the bill for alterations to The Fuffins that had taken place in the 1950’s when Tom’s grandfather bought the farm. This old bill included creating an indoor bathroom and describes changes to a coal house where the kitchen is today. Some of the alterations had been carried out with very poor post-war materials.

First Guests In the spring of 2008 our first rather unexpected, uninvited guest took up residence in the Fuffins. Undeterred by blocked up windows and unwelcoming hosts these two blackbirds were determined to make their annual visit. Eventually, to everyone’s dismay, they moved into the Butterfly bedroom en-suite and made their nest on a pile of joiner’s wood. The pair must have heard about our green, wildlife friendly policy and had chosen a safe, comfortable 5 star place to stay—with Radio 1 to listen to every day on the builder’s radio!

The workmen grumbled and in desperation the plumber welded around the birds, often only feet from the nest. The joiners’ had to leave the shower room walls unfinished and found the birds a nuisance ... until the day the cat tried to sneak up the stairs. The poor surprised cat was faced by a mob of angry workmen and was evicted without ceremony, its tail twitching indignantly.

I’m delighted to say that, thanks to the protection of joiners and plumbers, three of the eggs hatched and all fledglings left safely with their parents at the end of their visit – our first satisfied guests! 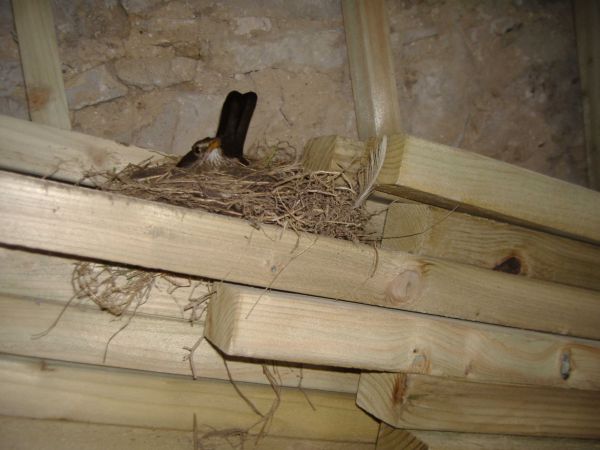 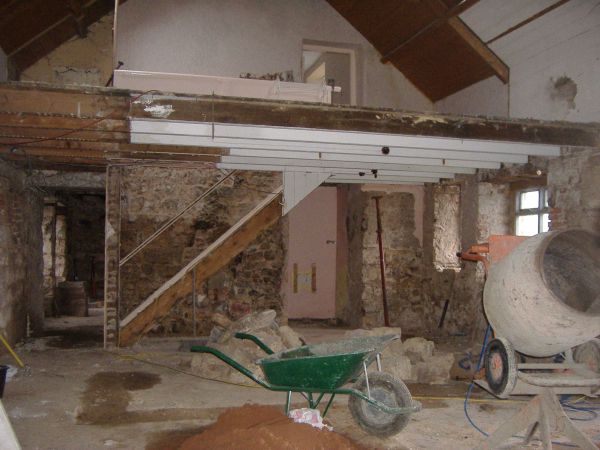 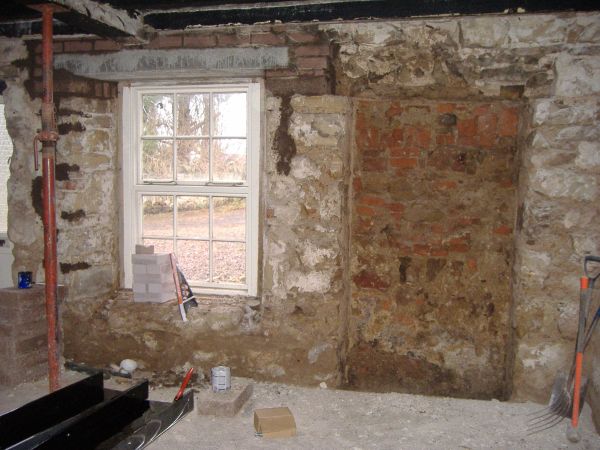